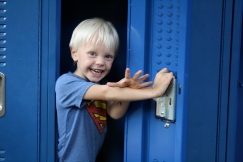 On a snowy April morning in 2008, I awoke with little tiny pangs of labor.  Too much, in my opinion, to head to the hospital at 7 a.m. for my scheduled induction.  Wilder/Louelle was on his/her way.  My oldest son weighed in at 9 pounds, 4 ounces and was purple and breathless at birth.  He spent his first few moments with a NICU team ventilating him to life; something we would not chance repeating.  But on April 11, 2oo8, I was getting signals that this little one was only a day or two behind what the doctors ordered.  At 7 a.m. in a warmish and sparkling snowstorm, we decided a rigorous walk held better potential than Pitocin.  And it worked!  After a beautiful walk from our front doorsteps around the lake and a stop for hot cocoa, we were ready.  With subdued excitement and a call placed to our doula and friend, we were on our way to bring baby 2 into the world.  Eight hours later after a textbook labor (pain, water, yelling, water, pain, hand wringing, massage, pain, vomit, pain relief, rest, pushing, yelling, baby), we were a family of 4.  Between pushes I actually said out loud, “this is kind of fun!”  So far, that has been an illustrative metaphor for parenting young Wilder.

I can say now that Wilder was appropriately named.  Ironically, age zero to age one was a halcyon year.  This sweet child placidly tucked himself into my sling and stayed there minus one pudgy hand for hours every day.  He nursed, he slept, he laughed.  Wilder glowed; people could not pass him by without smiling.  I remember when I swaddled him at night and laid him in his crib Wilder would just turn his head to look at me and drift off to sleep.  He did everything short of saying “thanks for another great day, Mom.”  Then he learned to crawl.  He has not sat down for more than 17 seconds since.  His personality has always been game; charming, agreeable and adventurous.  He just has an intense case of the wiggles.  When he was 9 months old I came downstairs for breakfast to find him standing on the kitchen counter (escaped from the crib), naked (removed his own diaper), and opening cupboards (did not yet walk).  Wilder is industrious, zealous and passionate.  When he eats he involves every limb, sense and surface on his body.  He swims in his food and leaves a wake.  When he cries he falls to the floor and waxes prophetic about friendship, love and injustice.  When Wilder tells stories he gleans attention and delights listeners (perhaps baffles is more accurate, actually, but he woos the crowd).  Wilder has the same mischievous smile as my mother, which garnered her the nickname among her 3 brothers and sisters, “the foxy one.”

Until Wilder was about 3, I was happy to have him along on most any excursion.  We were very attached at the hip.  I hope that we are still attached, but he is a classic middle child and a little bit of an enigma.  He likes his leash long, but loves constant reassurance I adore him.  He has big, big feelings, but they never last long.  He longs to be treated just like his older brother, but occasionally steals my lap from his baby brother.  He spoke “cool kid” from the moment he could say  his R’s.  He winks at people.  He employs his eyelashes and baby blues at will.  He knows his numbers and letters and colors, unless you ask him.  He expects the world to be his oyster, but he is more easily crushed than I want for him when his world doesn’t provide pearls.  He is bold with a tender heart.  He isn’t easy-going these days, or easy to parent.  He sticks his fingers in his ears when I discipline him (even if I hold him and whisper).  His emotions ramp up from zero to sixty faster than Lightning McQueen.  He moves too fast and breaks things on accident and injures me inadvertently 5 times a day.  But he gives the best hugs.  He squeezes so tight.  And he says “mama mia love you” in his sleep.  He is a fantastic dancer.  His self-authored songs are insanely creative and his voice is cherubic.  And, perhaps best of all, he says “uffda,” and then all else is forgiven.

Wilder; you are 5 today.  Your first 3 years I was with you every step of the way.  Since then I have just barely kept up.  But I am always here, right behind you.  Your dad and your baby brother are too.  Your big brother is just ahead.  You are surrounded and we are all attempting to predict your next move.  I know you want to take this world on boldly on your own and I am so proud of you.  I can see you now in your sheriff’s hat, your blue leather fringed vest, and your duct taped sword racing to save the day.  I can see you because I am hiding behind a tree.  And I will always be behind that tree keeping my eye on you.  As much as I trust your wisdom and admire your courage, you were born into my love and my protection.  When you can dress without putting anything on upside down or inside out or on the wrong foot in time for school, I will grant you a little freedom.  Then when you can read books and write stories and figure equations and play drums on your own I will let you go a little more.  When are old enough to have your heart broken and mend it your own way, I will offer you a little more space.  I also know that you will always love my hugs, my cookies and my lullabies.  And I will always love your songs, your stories and your perspective.  Wildman, grow.  It’s gonna be awesome.  And I will be right here.

Addendum: when my birthday boy awoke this morning he sat in a chair upstairs quietly looking out the window at the snow and listening to the thunder.  I watched him for a moment and asked, “How are you doing, buddy?”  He lifted his shirt, rubbed his belly and said, grinning, “I don’t feel any bigger, but I am feeling right here kind of birthdayish.”

One thought on “Wilder, Age 5”