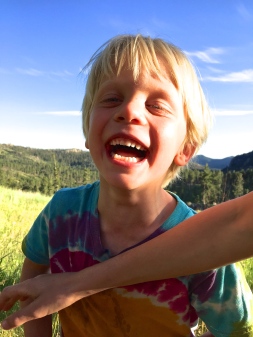 I have few photos and lots of blurs of Wesley because he never stops moving. “Moving” is actually an oversimplification. We once mistook seven men with crow bars stripping the roof off our house for Wesley. We awoke to the noise at 7 am and laid there thinking it was Wesley’s normal Saturday morning routine until he leapt upon our shins and announced “the roofers are here!” Wesley bounces.

Wes is silly and stubborn and sweet. He is industrious, precocious and smart. Aside: his older brother is sitting on him right now saying, “I bet you can’t sit still for 30 seconds!” Easy win. Wes makes us laugh and run and leap with him and we barely keep up. Sometimes just for fun, we set a timer and all three of us attempt to follow every move Wes makes, like those early brain development research projects, for as long we can. Not one of us has made it past five minutes. Luckily, Wes also enjoys hard work. By the time he was three, it was Wes I requested when I needed help lifting a bench up the stairs to the front door. Wood to haul? Snow to shovel? Truck to unload? Call Wes.

Wes is also my child who hates his dad’s tomato joke because he feels bad for the one told to “ketchup.” He sleeps with a family of “not stuffed” foxes. He plays with my hair. He dresses “fancy” in bow ties and sport coats to special occasions, like weddings, school picture day and breakfast with his grandparents.

Aside: he just “tapped” my shoulder for attention and I am pretty sure I will have a bruise.

Before Wesley was born, I was walking down a trail when he kicked so hard it knocked me off my path. That metaphor is not lost on me.

Today, Wes woke up and said “I am no longer a small six. I am a big seven!” This also means I am no longer the parent of small children. When did that happen?

I just overheard Wes say to his dad, “because, Jason, I am the Pig King!”

I have no idea.

Though he is bigger, I will still “pickle” Wesley

up if he asks me that way. I will read to him as long as he is willing to listen. 3.5 minutes, on average. I will always hope he comes to snuggle in the early morning, even though he snores like a bulldog and always manages to head butt my nose. I only find it pleasant because he will grow out of it someday. I will wake him up by singing “I love you” until he has roomies other than his brothers. Then I will text it. I will have very low expectations on his adulting until he is 30 because that is what third children are for in a family of five. Wesley is a big 7 today, but he will always be our “Smalls.”